Hosted in Dublin, October 15th to 18th, the 13th Federation of European Nutrition Societies (FENS) Conference is the premier European meeting in its field. The theme for this year’s conference was “Malnutrition in an Obese World – European Perspectives”, and featured a wide range of international speakers, covering the spectrum of nutritional science in plenary talks and smaller parallel session’s. The event also hosted workshops, “hot topic” presentations, panel debates and industry symposia.

The paradox of malnutrition: overweight and undernourished are not mutually exclusive

The opening address at FENS was given by Dr. Joao Breda, Head of the World Health Organisation’s European Office for the Prevention and Control of Noncommunicable Diseases. Dr. Breda is Russian Federation & Programme manager for Nutrition, Physical Activity and Obesity.

In his talk, Dr. Breda. addressed the double burden of malnutrition, which refers to the idea that people can be overweight and malnourished at the same time due to consumption of ‘empty calories’. Dr. Breda touched on the drivers of malnutrition in obesity across the lifecycle, which included physical inactivity coupled with the over-consumption of high calorie foods that are low in beneficial nutrients. The talk also touched on the key stages of tackling obesity, with the focus on preventative nutritional strategies aimed at those most venerable to the double burden of malnutrition – children.

In keeping with the theme of the conference the proceeding talks focused on the many aspects of obesity and malnutrition throughout the lifespan. In an interesting talk on muscle wasting with weight gain (sarcopenic obesity), a FENS scientific committee discussed key drivers of why, and how humans lose valuable lean tissue with age and gain undesirable and disease inducing bodyfat. In sarcopenic obesity, a person’s overall weight may not even change, but their body composition becomes higher in fat and lower in muscle, which can increase risk for disease.

The key points of the talk included:

The surprising theme coming from this talk was that the traditional classification of weight measured by BMI (Body Mass Index) is not a sufficient tool for measuring sarcopenic obesity as it gives no indication of muscle mass. However, maintaining muscle strength across the lifespan was said to be key in the offsetting muscle loss and maintaining good metabolic health.

Ultra-processed foods – is the definition accurate?

One of the more controversial topics under discussion was ultra-processed foods and their role in driving obesity. These foods were defined as “Industrial formulations typically with 5 or more ingredients not commonly used in culinary preparations, such as hydrolyzed protein, modified starches, and hydrogenated or inter-esterified oils, and additives whose purpose is to imitate sensorial qualities of unprocessed or minimally processed foods to disguise undesirable qualities of the final product”. These these food products are heavily advertised and include salty snacks, sugary beverages, breads and pastries.

It was also highlighted that countries with the highest consumption of ultra-processed foods had the most obesity, particularly the USA and Europe.  This talk prompted a hot debate, as some attendees questioned the validity of the “ultra-processed” definition, which in theory would include staple foods such as whole grain breads which are staples for many dietary recommendations.

More information on ultra-processed foods and health can be found here.

Keys to success for calorie reduction 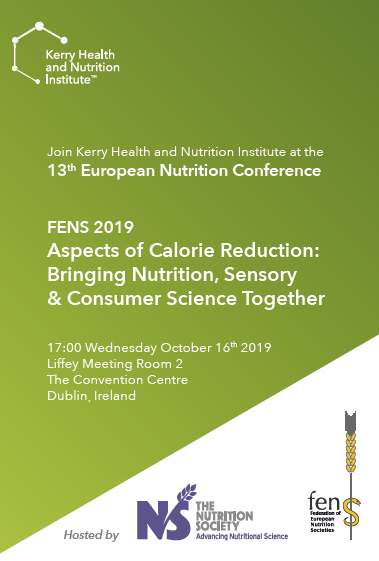 In keeping with the theme of the conference, the Kerry Health and Nutrition Institute hosted a session themed “Aspects of Calorie Reduction” which brought together a blend of nutritional, sensory and behavioral sciences.

This talk focused on the key drivers of consumption and covered areas such as, “The role of food oro-sensory characteristics and nutrient content in determining meal satisfaction”, and “How sensory cues are used to influence Calorie Perception and Food Intake”.

The key take-home points from this talk:

For more information on this topic, listen to our webinar recording Calorie Reduction: Formulating for Success.

Overall the conference presented some valuable insights into the latest scientific research and hot topics within the food industry. As is the case in science, some new concepts such as ultra-processed foods were controversial and provoked debate whereas others, such as the need for overall calorie reduction, offered a chance for industry to innovate and provide solutions.

The Future of Food Preference – What You Should Know…